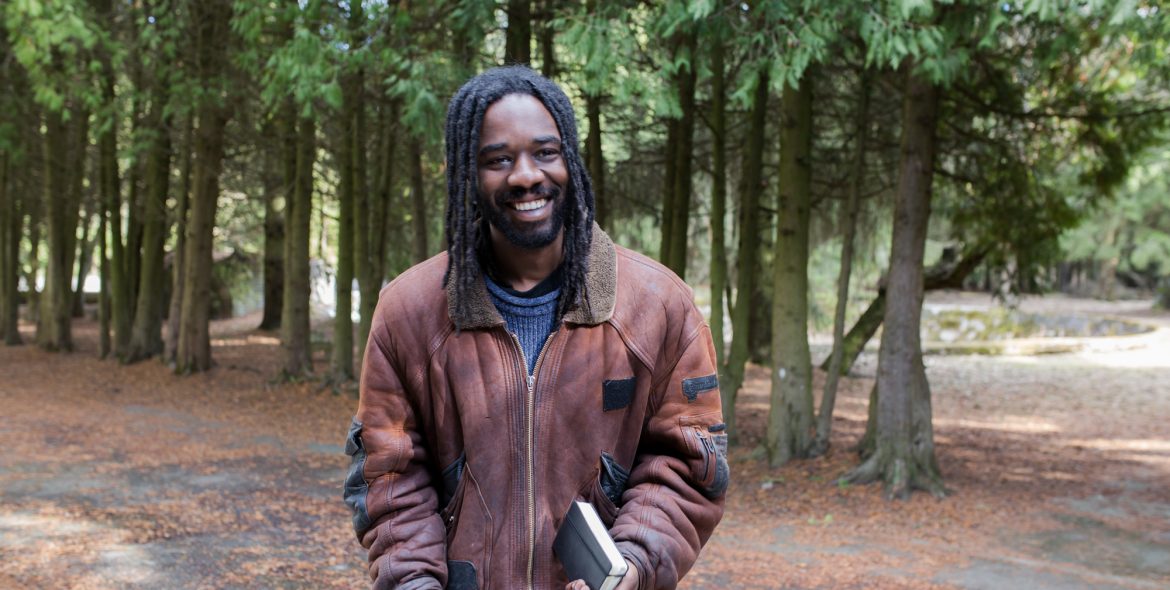 London-based artist Tamu Nkiwane explores themes of historical amnesia, local identity and spirituality. Combining autobiographical elements and universal experiences in his body of work, he creates visual narratives full of cultural references. In the following conversation, the artist shares his thoughts on Kaunas, paintings by Mikalojus Konstantinas Čiurlionis, and the installation called Green River, which the artist created for the 12th Kaunas Biennial AFTER LEAVING | BEFORE ARRIVING.

In your work the personal is usually cleverly merged with the impersonal. Do you tend to see personal experiences as a starting point?
Normally yes, it’s about personal histories that may start with written texts and that lead to music, a sculpture or a drawing. But all of those are questions that sort of filter out and affect other things. A very obvious example of that is my last four exhibitions that led into each other. The first one was based on a conversation with my grandad about going to Africa. The second one was the exhibition in Africa, in the National Gallery of Zimbabwe. That one I saw more as a symbol, so I created an exhibition with all the energy I was feeling at that time. I laid it out like an unfinished chess game. I literally had this game board of small maquettes with unclear rules.  And the third one in London, called Blue Plastic, was an evaluation of those experiences, of what was first asked. The energy that was felt in Blue Plasticon a personal and historical level is represented in Green Riverbut just from another angle.

Could you tell us a little more about the initial idea of Blue Plastic? How was the idea of Blue Plasticadapted to local context of Kaunas for Green River?
What led to Blue Plasticwas a conversation with my grandfather on his 90thbirthday in Zimbabwe. I came down and I tried to capture the mood and the feeling of the country going through a transition. I tried to listen a lot and understand the mood. That’s why I used the market stool for the exhibition. It’s a metaphor. That’s something that can go up and can go down. It’s not permanent like a shop. It’s an impermanent structure. I thought that it was quite an interesting metaphor. A lot of the items and objects I use I try to use to sort of demonstrate the connectivity within these narratives. When thinking of the tittle for Green RiverI looked at the title Blue Plastic, which derives from the idea that blue represents a non-graspable reality. For example, you can’t touch the blue in the sky or the blue of the ocean – it belongs somewhere else. The plastic is this mutant of a material with a ridiculous life span which simply pollutes and lingers. If you look at the history of blue, most notably ultramarine, its features were used solely by the church to represent Madonna, paradise and Christ, and it was banned from outside use. I like the idea between blue’s past and the cheapness and availability of a blue plastic bag; there’s an odd symbolism there. The title Green Riveris an expansion on the previous notion, that is, green was once called blue; the river leads to the sea; and plastic is an immortal material. I tried to keep some of that energy that was felt in Blue Plasticbut filtered it through a Lithuanian lens. In Green RiverI also had some of the images from Blue Plastic, like having the market stools up that had some sculptures linked with the African narrative. But it also had some objects that I made in Kaunas. Most of the objects I use in Green Riverare influenced by the conversations that I had here while talking to people and moving around, seeing sites.

As for the colour green, I heard it has something to do with Mikalojus Konstantinas Čiurlionis’s artworks.
I love seeing his paintings. He uses a lot of celestial bodies in his paintings. Green also has an element of melancholy. I love how he used it in his images. His paintings are like still shots of emotions. And he went into astrology, he had this beautiful park with these celestial beings going up to the mountainside and almost fantastical images of pyramids and clouds. I thought that some of the elements of all that escapism, otherworldly presence was captured so beautifully. And I also see green a lot visually in your country. I thought it was beautiful and I wanted to capture some of those elements in the exhibition.

Green Rivermight seem to be chaotic at first glance, but the environments that you created are actually of quite strict order. What is your philosophy toward the objects that you use for this installation? How did you choose them and how did you arrange them?
So, there’s a plateau. And on the plateau, I asked for onions, oranges and green tea leaves (things that need digesting). At first glance, it seems random, but it’s not so. Red onions are often linked with hardship and time, which is linked with the god Saturn/Cronus (god ofgeneration, dissolution, plenty, wealth, agriculture, periodic renewal and liberation). Also, there are green tea leaves, which have been used as a specific remedy for ailments. In the colour spectrum they are alternative colours that share a harmony outside the specifics of the object. You’ve got orange and red, which are secondary colours placed accordingly. Oranges are done in pyramids in reference to both Africa and Čiurlionis. Kaunas is depicted in each thing on a symbolic level, for example, the oranges people smuggled while they were smuggling Lithuanian books into the country. So, you have something very personal there in the story alone and you begin to have these interplays. I depict an X-ray, which is again a very internal depiction of the body, a hidden area that even we are not aware of. All of these become very private things. It’s not obvious, but it’s like a visual play with many narratives. And when you look at the clay in its anamorphic state and the material, which is something tactile, you get this feedback as tactile movement is the first thing humans do. It’s this human memory and knowing, like we often forget we are small universes in and of ourselves.

What left the strongest impression on you here in Kaunas?
The people are really friendly and passionate. I liked the architecture from different periods, especially the Modernist buildings here, but sometimes you can bump into really old ones with beautiful wooden beams, dark green paint and a yellow, green and red flag perched outside. Those are the ones I really like. And then, of course the museums. I went to the Devil Museum, which I thought introduced another viewpoint of cultural beliefs of Lithuanians and neighbouring countries, different depictions and tales which are really powerful for not being very long. Actually, all the museums that I’ve visited here were interesting but also quite sad and melancholic. You get quite a melancholic feeling when you go into these museums. But the melancholy makes sense, because of the local history.

However, what I found most interesting here were the stories that people tell. Those are not obvious things that I could google. Those are conversations. I can’t get that from a book. People were showing me things in the city, and when you see these little things it resonates with the other elements nicely.