Lýdia Pribišová: ‘Contemporary art is a space of discovering and testing the unpredictable’ 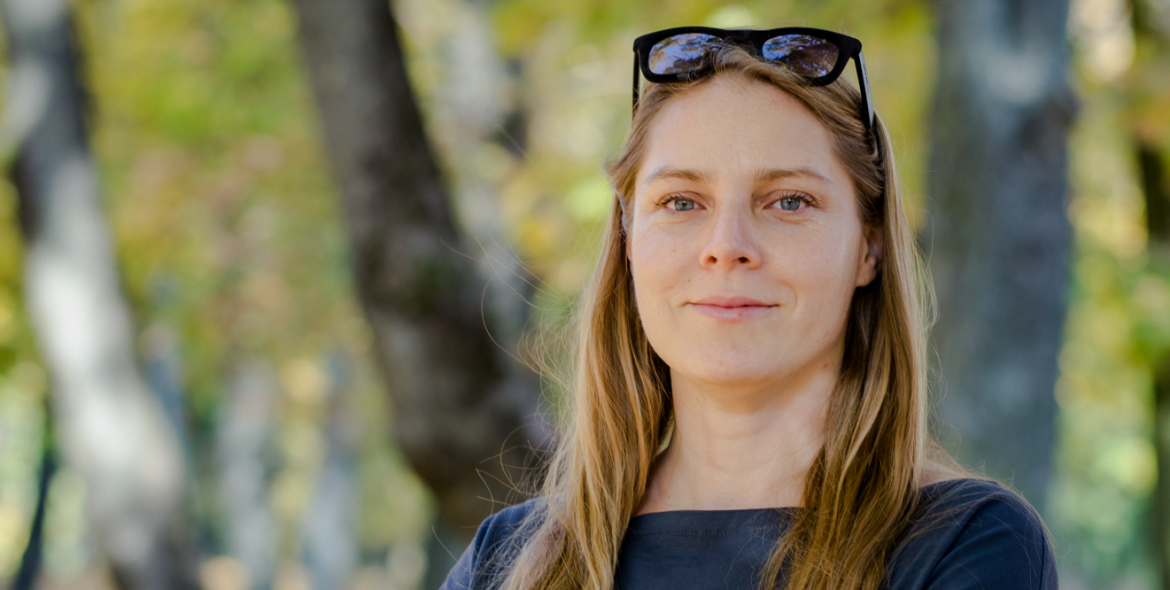 Slovak curator and editor in chief of Flash Art Czech & Slovak Edition, Lýdia Pribišová is one of the five curators of this year’s Kaunas Biennial AFTER LEAVING | BEFORE ARRIVING. In her curatorial practice, Lýdia Pribišová focuses on collaboration between artists and professionals in other fields of culture and science, and believes that good contemporary art can awaken the most exciting reflections in us. In the following interview, the curator shared her thoughts on the characteristics of interdisciplinary cooperation, observations on Kaunas and the revealing qualities of contemporary art.

You’re the editor in chief of Flash Art Czech & Slovak Editionmagazine. Could you tell us more about the magazine? What approach to contemporary art does it encourage? And how did you become interested in editorial activities?
I have been the editor in chief of Flash Art Czech and Slovak Editionsince 2015, but I co-funded it in 2006 with Giancarlo Politi and Helena Kontova, directors and owners of Flash Art International based in Milano, and Slovak curator Juraj Čarný, who was the first editor in chief. Helena Kontova comes from Prague, Czech Republic, so she wished to run a  local edition of her magazine. The Italian edition already existed. And through combining funds from both countries, Slovakia and the Czech Republic, we are happy to have existed for 13 years already.

Flash Art Czech and Slovak Editionis the only periodical in the Czech and Slovak republics that provides concise and highly current information on the goings-on in both the domestic and international art scenes. Since its inception it has constantly focused on mapping the local art scene and highlighting what stands out in a global comparison. Over the years, the title page of the magazine has featured both established artists (Milan Grygar, Zdeněk Sýkora, Stanislav Kolíbal) and up-and-coming stars including Jiří Kovanda, Ján Mančuška, Kateřina Šedá, Anetta Mona Chisa and Lucia Tkáčová, Roman Ondák, Miroslav Tichý, Pavla Sceranková, Eva Koťátková, Dominik Lang and Jiří Thýn. Published in the Czech and Slovak languages, the magazine fosters a broader discourse on contemporary art in the form of monographs, theoretical essays, interviews with artists and other art scene protagonists and ‘polyphonic’ panel discussions. Every issue strives to comprehensively reflect on the chosen theme identified as the most topical one in contemporary art. The magazine’s merit consists in integrating Czech and Slovak art into the global context and building a dense distribution and subscriber network across both countries. The magazine is published quarterly, and the next issue will be the 53th, dedicated to the topic of artist books. In 13 years of existence, we have also published three issues in English focused on international distribution.

I was always keen on editorial work. During my childhood and adolescence I founded and ran three magazines, and from my student times I often wrote for various newspapers about contemporary art. When Juraj Čarný, my director at the time at Space Gallery, who was asked by Giancarlo Politi and Helena Kontova to found the local branch of the internationally famous magazine Flash Artwith them, asked me to start the magazine with them and to work for the magazine as editor, I was very glad. And I still am. This work is very close to my heart.

You’re the co-founder of an online gallery of immaterial art called Evolution de l’art, where collectors and art lovers can buy ‘a conversation about art that will last as long as possible’, a ‘birthday party’ organized by an artist, or a right to ‘make artists obey their horoscopes’, just to name a few examples. How did you come up with this idea?
Italian artist Cesare Pietroiusti, who we invited from Space Gallery in 2007 in Bratislava where I used to work, came up with this idea. He was asked to prepare a plan for a show, and as he is a very experimental artist and an ex-psychiatrist who always examines the limits of  art processes, he came up with this proposal. He invented this gallery and invited us, the Space gallery team, to found it with him.

Then, Pietroiusti co-founded the other branches of the gallery in Brussels and in Amsterdam with other teams. In his work, Pietroiusti tries to create situations in which some sort of paradox leads the viewer/participant to see something that is considered ordinary, banal, taken for granted in another light. In this sense, the laws of economics represent an interesting field of research. He tries to break down the established convention that the work of art must be of a physical nature in order to have economic value and be exchanged for money. In this project we tried to ask questions such as: Are we sure that the only form of economic exchange is physical products for money? Are we sure that a work of art that physically exists is economically more valuable than a non-material artwork? The art market has very rigid rules, and these are both a challenge and a possible opportunity for experimenting with unusual forms of paradoxes and critical views.

Is immaterial art popular among collectors?
Actually, as far as I know, we have sold only one artwork, which involved reading a text on a bench in a park, by Italian artist Cesare Viel, for 3,000 euros, from which a half went to the artist and the other half to our gallery. So, it seems that it is not so popular, and we did not even expect it.

In the Evolution de l’art gallery there’s also one offer made by you. You offer that you will read potential buyers their favorite fairy tale and that you can do that in five different languages: Slovak, Czech, English, Italian or German. That makes you an artist, a little bit.
Unfortunately, nobody bought this ‘art piece’.

Well, maybe not just yet. Why, would you say, is contemporary art (material or not) worth a try? What do you find most interesting about it personally?
Contemporary art offers a space for discovering and testing the unpredictable. It is the area where the normal social rules are questioned and where almost everything is allowed. Good contemporary art could also be seen as a soft practice of education; with its sharp criticism combined with smart humor, it has a big potential to wake people up and encourage them to think about contemporary global problems, such as the environmental crisis, migration and poverty. And it is using the language of metaphor, which can communicate more deeply and viscerally, with both the rational and irrational parts of the mind. It gives you the feeling of serendipity and eureka.

I am interested in the borderlines of art practices, in testing its limits. In my curatorial projects, I am focused on subversive art practices that go against typical social and cultural patterns. I observe how cultural stereotypes and conformism are constructed as well as the shifting positions of individual subjects in society.

You’re also a co-founder of the civic association Pilot, which encourages the cooperation of scientists and presents established and emerging young artists from abroad in Slovakia. How did you come up with an idea to gather different scientists? And why is such collaboration interesting from your point of view?
The collaboration with various scientist relates to the needs of the artists. I often curate the shows of artists who are operating with the physical elements of nature and ecology. So when I curated the show by Italian artist Luana Perilli, whose installations are inhabited by ants, we consulted about their living conditions with myrmecologists, or when I prepared the show by Spanish artist Jorge Peris, who creates site-specific installations experimenting with electrolysis, salt crystallisation and marine plankton (Artemia Salina), we consulted with the specialists in these various areas. Italian artist Lucia Romualdi needed to examine the changing of the levels of the sea in different ports in the world for one project, while Danish artist Maj Horn explored the connections between play, learning and children’s own spaces within the city, so we realized her research with the help of educators, architects and sociologists.I am working on a large group show about mushrooms, which will take place in 2020 in MODEM in Hungary, where I am planning to involve Nomeda and Gediminas Urbonas and Andrej Polukord, Lithuanian artists participating in the biennial, so I am already studying various books and other materials about mycology.  We often prepare projects that combines various types of art. The show I am preparing now, for August – September 2019, is by Singaporean artist Ming Wong, in collaboration with two Slovak writers. I appreciate these collaborations because with every project I learn something new from different fields.

The theme of this year’s Kaunas Biennial was predetermined from the beginning. Why did you find it interesting and what aspects did you try to highlight once the curatorial process begun?
The theme of the biennial, AFTER LEAVING | BEFORE ARRIVINGwas very attractive to me from the beginning because of my perspective as a member of a nation (Slovakia) with a similar history, and even in today I can see a lot of parallels. From the beginning, Kaunas felt very familiar to me. The most interesting moment to me, from the many possible explanations of this multilayered headline, was the moment of suspension, the atmosphere of transition, no more/not yet, with a lot of residue from the past. And regarding the curatorial process, I am still surprised how smooth it was, that we had always very open, fair and empathic collaboration between all the curatorial team, without arguments or crises. Because, of course, when working in a group and making all the decisions together, the potential of the misunderstanding and tensions was great.

What was it like to work in collaboration with other curators? What were the challenges you faced during the process and what, do you think, you gain in exchange?
I am a quite impatient person, so what I learned was to wait when all of us give a statement and feedback to the issues during a discussion, and to let myself convince others with valid arguments about something that from the beginning I didn’t consider interesting enough. After a long discussion I can say that I am happy with all the art works we have present at the biennial, which is a great conclusion. And I gained new colleagues, all of them great people and professionals. I hope we will collaborate in the future. I also learned how important the work of architect of the biennial is. We worked with Linas Lampinskas, and he was wonderful. He resolved many complicated situations in the Picture Gallery by opening it space and proposing an alternative entrance to the biennial venue; he designed very sensitive and empathic display of all of the works. It was a great pleasure to collaborate with him.

And I met lot of interesting artists, proposed by my colleagues, which I did not know before and some amazing Lithuanian artists, with whom I would love to work. For example, this summer I am curating a solo show in the Kunsthalle in Bratislava by Žilvinas Landzbergas, who I met during our winter studio visits. And I already mentioned the planned show involving Nomeda and Gediminas Urbonas and Andrej Polukord.

If you could name one thing that you always take with you on your journeys (besides passport or a toothbrush), what would it be? And why?
I still travel with a bottle of water. This has been, for me, the basic thing to have, from adolescence, when I used to hitchhike across Europe during the summer holidays, mostly to the sea. Many times it was the most important thing. Regarding this question, I must say that I love the paradox contemplated by philosopher Frédéric Gros, the author of the excellent book A Philosophy of Walking[1]: the further and longer we walk, the less stuff we bring along.
[1]Gros, Frédéric, Elementare, in: Andare a piedi. Filosfia del Camminare (Marcher, une philosophie), Garzanti Libri S.r.l., Milano, 2013, pp. 187-189.