Laura Kaminskaitė: “Curiosity is one of the most amazing qualities” 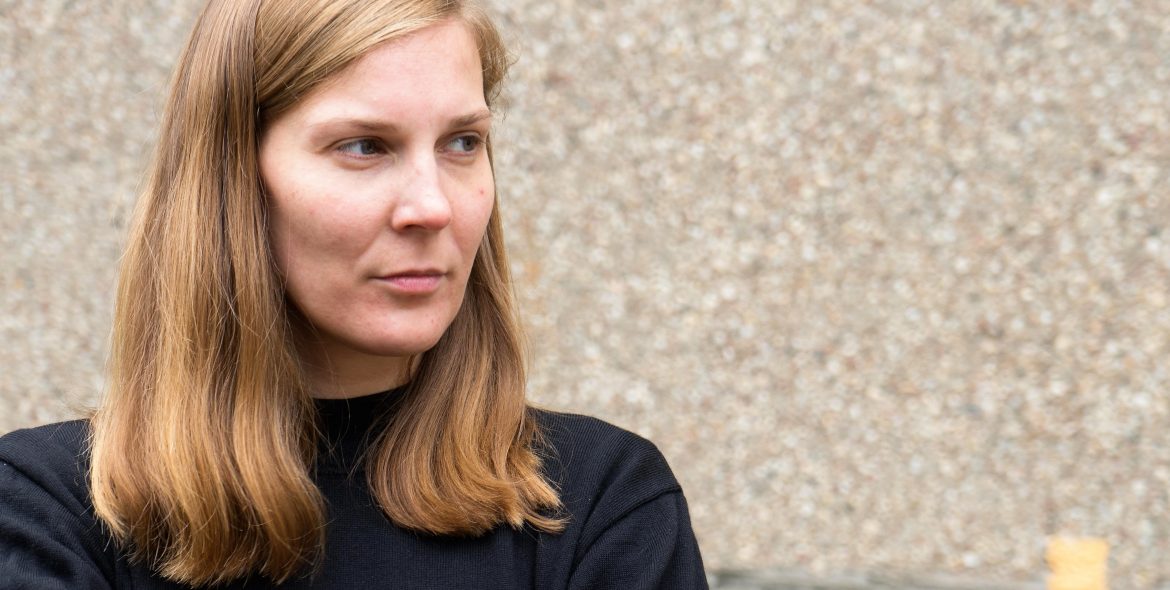 Laura Kaminskaitė is an artist from Lithuania, whose works play with words as elements that constantly shift their forms and become works of art that find their place in galleries. In this interview, the artist shares her thoughts on her creative road, the rhythm and inspiration. The work by Laura Kaminskaitė, Its Own Unfolding Elsewhere, is created specifically for the 12th Kaunas Biennial and exhibited in Kaunas Picture Gallery.

What would you like to tell about your creative experience?
Together with my family, we lived and travelled around the Soviet Union and the democratic countries of the Eastern Europe during a very interesting time, 1989–1999, when the old Soviet regime was collapsing in Russia and the structure of the new system was rapidly evolving, including various ways to earn a living, new understanding, approaches and values. It was a very dynamic period.

I have always cared about both the physical and imaginary journeys. I remember walking my dog in my early teen years, maybe in Moscow. I looked up at the starry sky and gazed at it for a while. It seemed that each star takes a piece of me and thus I become a part of the universe.

An abstraction is open for lots of changes. This is where new words and worlds could appear. Sometimes I see my creative practice as a development of conditions suitable for the imagination and physical journeys, design of the parasitic language, inhabiting the existing things with new thoughts.

I do not distinguish between the exhibition and the work; both these things are similarly complex and important to me. My influence on the work is not defined, I shape certain forms for an idea only to some extent, and the rest depends exclusively on the imagination of the spectator.

Why have you chosen language as a means of expression for your works?
Language is a part of our social life. Art is one of the areas of the social world, as a comprehensive version of life in the shape of an exhibition. Exhibition space is a wonderful space for us to meet and chat. Conversations are like a unique expression of love.

Comparing language to an image, one linguist from the 18thcentury defines nouns as a shape, adjectives as colours and the verb as the canvas itself, upon which the colours become visible.

Work and adventures with words have started from the names for the works of art and exhibitions. The name is like a plane that brings you to different airports where a guide might already be waiting for you.

The title of the work does not only describe the work, it can also be an equally important part of the work, supplement or extend it. The name can contain in itself an entire walk, irrespective of the fact whether it also contains a script for it or not, or whether it has only one verb that would define the nature of the movement of thought and the direction thereof. A name can be a long text in its own right. And sometimes people who cannot remember a difficult title give nicknames to the works themselves and thus tame it without even noticing it, making them somewhat familiar.

Sometimes you need to walk along long sentences or conversations instead of using a spot-on phrase that is used without questions so you would rediscover its relevance or could see it anew.

What do letters mean to you? And the poetry?
It is sometimes surprising how a poetic image that we see before reading, while suggested by others, seems to look as created by ourselves. It becomes a new creature in our language turning us into what it expresses and thus expressing us.

I perceive the printed letter as a sculpture where each font possesses its own subtleties of form. I think about the written letter as a movement, spatial shape in time. It is even more interesting to think how letters interact with each other and create the sound.

Where do you look for the inspiration?
In the conversations I’ve heard, books and rumours…

Especially the rumours that seem so charming because of their abstract and shifting structure.

It’s interesting you’ve mentioned inspiration… Sometimes it resembles a phone call to which no one responds, because you turn off the sound or your phone is out of power. Then you walk around the city and look for things. You enjoy the movements of your steps. You create different steps that become similar to strange movements. You walk around the city, find various conversations, adventures and create new forms. You start to stretch words, twist them, pull and release, and then you laugh. It seems that they become new words that become home to things that have not been named yet.

Words in your works gain various forms unusual for the text and galleries. How do texts in your work gain a shape?
Sometimes it is a very intuitive thing, but I always think of how many meanings a text can gain and what does it create in different contexts, in relation to the one who experiences them within the exhibition, everyday life and their environment. Or simply about when they end up next at the tables where different conversations are happening.

I’ve recently encountered an interesting concept of text echo which describes a situation, in which spectators repeat parts of the text from the exhibition / the work of art in their communicative language. What I find interesting is that the echo between two spectators becomes the third conversant.

Its Own Unfolding Elsewhere, 2019 is created specifically for the 12thKaunas Biennial. Can you tell us more about the creative process?
I was invited by Daniel Milnes, one of the five curators of Kaunas Biennial. I found it to be exceptionally interesting, because I have never been able to participate in the exhibition in Kaunas, so I gladly agreed.

I was immensely impressed by the modernist architecture of Kaunas Picture Gallery. It is as if walking into a sculptural work that exists in different periods of time. I was very glad when I found out that Linas Lapinskas will be working with the architecture of Kaunas Biennial. It is pure pleasure, when a gifted and careful architect takes care of the exhibition space and it is so interesting to discuss with him the process of exhibition implementation. I think that Linas Lapinskas has done wonders removing the layer of solutions that have piled up through a long time in the exhibition hall of Kaunas Picture Gallery. A layer which like a makeup after a party hid charming proportions of modernist space, their shapes, character and the charm of the space in general.

Through a lot of conversations with the curator, among other suggestions of mine for this exhibition, Its Own Unfolding Elsewhere was the one to grow up precisely. It is an abstract multi-layered textual work activated by the visitor of the exibition.

For one spectator this work can remain as a rhythm that will follow throughout the entire exhibition, for others it might offer a unique style to walk along the exhibition spaces. I find it interesting to imagine how a work can tell about an abstract experience of the spectator in the audience and everyday life and soon the work can again change its clothes and surprise introducing itself as an exhibition telling about itself from the perspective of the exhibition.

It is all rather complicated but when we go to exhibitions, we may all guess that we are going to end up in a space with white walls.

Your work is inhabited by a poem in English. What has determined such a choice? Do the creations in native and foreign languages possess similar power?
Each language implies certain choreography, style and character of thought.

I think it is very valuable being able to reflect another language through your native language and vice versa. The other languages allow to see what relations exist and how various things can be understood in a different way. Sometimes it takes to change the element that carries the thought so you can discover something more or travel more comfortably further. I usually start working with a text already in English but sometimes when I get stuck writing, I try writing in Lithuanian and then I observe how does work out in that case.

I guess I need to admit that the choice of English was initially affected by my personal artistic practice participating in exhibitions abroad. English has a multifacial role. It is still the international language of art with the tradition of articulated history of art, vibrant connection with the social sphere of exhibitions and its linguistic rituals but also it is a rather conservative language with its national history. I perceive English as a specific material from which I can create a unique thing, but I am not very strict when it comes to what a choice of language means.

Kosminis Megztukas is a series of works the name of which I decided not to translate to other languages. I am fascinated by how the sound of this name creates unique portals, entrances and exits in our imagination.

What is dangerous for those who live in the contemporary world? And what is dangerous when one is an artist?
To cease being curious. I think curiosity is one of the most amazing qualities of people. As an action, it can appear in very weird guises that makes us creative and maintain a live connection with the world.

What does the journey mean personally for you?
There is this story I like from Lewis Carroll’s Sylvie and Brunoabout a journey of a crocodile. And it sounds as follows: “Once upon a time, a crocodile decided to travel. And it got both its paws on its tail. And it walked and it walked all the way along its back. And it walked and it walked on its forehead. And it walked a tiny little way down its nose!” I think it is a nice story telling us about our experience with works, exhibitions and travels. We step into the exhibition with our existing experience and knowledge and through this journey we can step a bit further beyond the limits of our knowledge, attitudes that we have and end up someplace that is weirdly different, gain a new approach to some things, something completely new even though it can be very close to our everyday life.

The work of Laura Kaminskaitė Its Own Unfolding Elsewhere is exhibited in Kaunas Picture Gallery, as a part of the 12thKaunas Biennial AFTER LEAVING | BEFORE ARRIVING until September 29.