Jasmina Cibic: In Search of National Identity in Art 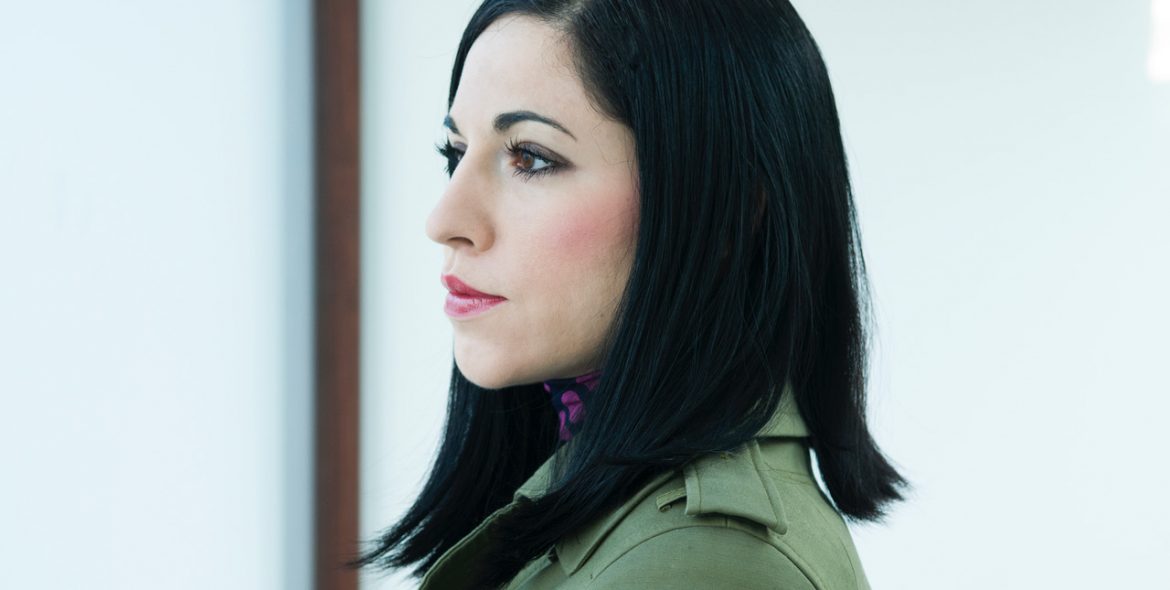 Jasmina Cibic (b. 1979) is a Slovenian artist based in London. In her work, the artist discusses issues of national representation, construction of national identity and gendering in art and architecture. In the following conversation, the artist, who has recently visited Kaunas and will be presenting work in the 12th Kaunas Biennial, shares her thoughts about the themes implemented in her work, her sources of inspiration, the constant fear of becoming a part of art tourism and her attempt to avoid it.

Your work is very much focused on the notion of ‘soft power’, the use of art and architecture on behalf of political goals and the construction of national identity. Could you tell us a little more about your artistic research in the field and how you became engaged with this subject in the first place?
In recent years I have been engaged in the study of archival remnants of soft power cultivation, where art and architecture have been utilised and commissioned by various nation states in order to co-create and establish their new ideological face. So, world expositions, state branding, failed ideologies and nation states have been the main chorus of my thematic. I began working around these themes consequentially to the identity crises upheavals of various nation states and their ‘cultural exports’, where right-wing politics and populism are thwarting progressive cultural capital.

In your body of work you constantly question the notion of the artist as someone who has the power to shape national entity. How would you define this power and what responsibilities come with it?
I am not sure I would argue for the ability of an artist to shape national entity. I am actually formulating a position which speaks precisely about this impossibility, albeit overlooked by the various (national, transnational) authority. Perhaps this is a super-interesting paradox; how art is utilized by national/ideological authorities to frame, represent and define them.

Your work is quite often driven by political gendering. Could you tell us a little more about this subject within your body of work?
I have been very fortunate to be able to work with some of the most incredible case studies of patriarchal construction of state-endorsed architecture from some of the key moments of the European identity crises from the 20th century – such as the launch of the Non-Aligned movement in former Yugoslavia in 1961 and Mies van der Rohe’s projects for Krefeld art collectors – which led to Mies being chosen as the architect for Germany’s re-aesthetization at the Barcelona 1929 EXPO. Delving into these themes and the political transcripts surrounding their discussions – we find that the female voice is completely absent. So, I chose architecture itself as a metaphor for the body of the nation state – an allegory equivalent to Mother Nation – which paradoxically needs to lure and protect at the same time. So, my projects are very much driven with the gendering of the (present and) past, and the female body always features as the carrier of emancipated political thought.

Your performative video work series NADA is an interesting example of how we can address the lack of female presence in nation-building discourse through art. Could you tell us about this piece of yours?
My NADA trilogy of films draws its title from the Croatian word for hope (nada), but also refers to Nada Kareš-Richter, the actress and partner of modernist architect Vjenceslav Richter. The NADA series examines three of European modernism’s celebrated architects and the role their work played in forming national representation at decisive moments of political crisis in the 20th century in European history.

The subject of NADA: Act I(2016) is Vjenceslav Richter’s first, but unrealized, design for the Yugoslav Pavilion at the 1958 Expo in Brussels. I appropriate and recreate the pavilion as a sculptural work that is also played as a musical instrument in the film by violinist Dejana Sekulić: she is seen tuning it and attempts to play the theme from The Miraculous Mandarin, a composition for ballet by Béla Bartók, which was performed at the 1958 Expo as one of the central artworks representing former Yugoslavia.

NADA: Act II(2017) presents a re-purposed, mis-imagined, and overwritten version of the choreography of The Miraculous Mandarin. Invested with new purpose by the artist in collaboration with choreographer Lea Anderson, Bartók’s original characters – the pimps, the prostitute, and the exotic Mandarin – are replaced with the archetypes of politicians, the ideal of the personification of the Motherland, and that most easily abused profession of modern practitioners: the architect.

NADA: Act III – The Exhibition(2017), was filmed on location at Haus Lange and Haus Esters, two residences designed by Ludwig Mies van der Rohe between 1927 and 1930 in Krefeld. The script is assembled from archival transcripts, political discussions, reports, and personal letters surrounding Germany’s 1929, 1937 and 1958 presentations at world expositions and their legacy. My script presents three positions: those of the Artist, the Curator and Germania, who engage in a discussion about the aesthetics and style of the artworks and architecture that should be exhibited at an undisclosed event of national interest in order to ensure international success.

Starting from historical facts, architecture and language, you’re perpetually working with archives in order to make large-scale research projects, incorporating artists, architects and scholars of all kinds. What are the specifics of being the artist-researcher and of such a collaborative strategy of work? How do you usually find a starting point?
I strive to create immersive installations and films which function as readers into specific themes, unpicking nation-building, statecraft and their gendering. Despite the complex entanglement of the discourse I present, the final outcomes are not intended as complicated didactic exercises, but spaces where I invite the audience to immerse themselves into mentally and bodily. I usually work directly with art institutions, biennials and festivals who invite me for my known work around the ideological reconditioning of culture, and I try to engage as much as possible with the local contexts without being an art tourist when producing new context-specific works. I keep an alarmedawareness of the fact that avoiding a certain level of art tourism is almost impossible. I am intrigued by observing how artists are called into other people’s environments to comment, assess and critique – in fact, many times we are expected to reignite somebody else’s cultural capital. This I find absolutely fascinating as a form of cultural export and a great conundrum of our contemporary condition, which suggests new modes of system resistance and production of new narratives as well as a development of new methodologies.