Mykola Ridnyi: “Nowadays, it is impossible to stay outside the political and social reality” 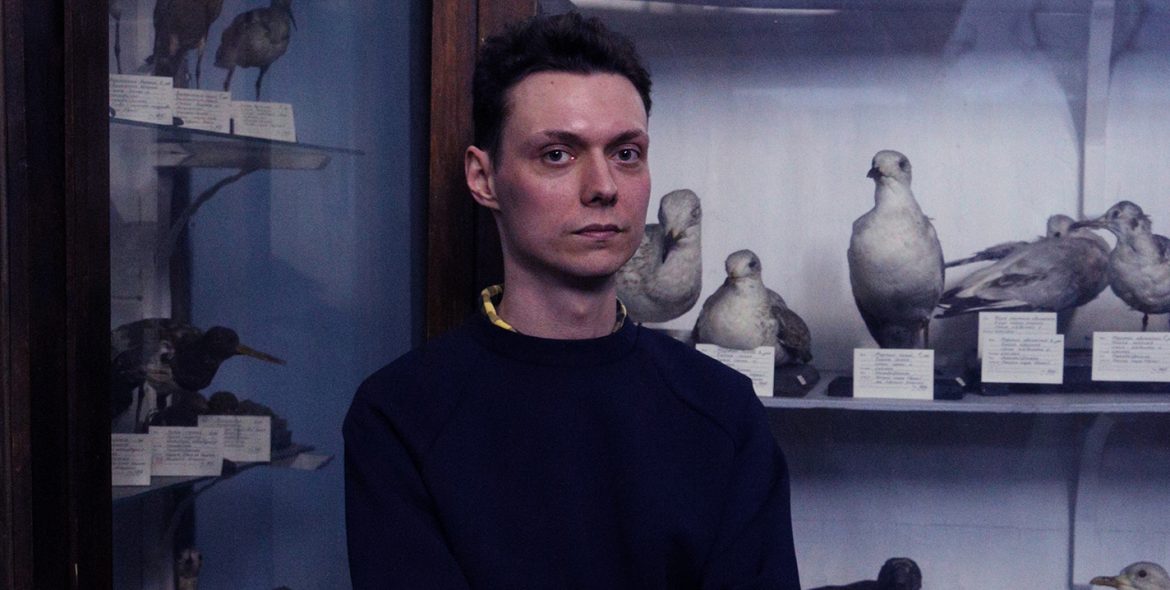 Mykola Ridnyi, Ukrainian filmmaker and curator, is one of the artists who has created a special project for the 12th Kaunas Biennial. His works encompasses various types of media: from early collective actions in the public spaces, to various site-specific installations, sculptures, photos and moving pictures that can be frequently met in his today’s practice.

During the 12th Kaunas Biennial “After Leaving | Before Arriving”, taking place from 7 June to 29 September, two works of Mykola Ridnyi will be introduced. A new work created for Kaunas will be established in Kaunas Railway Station, while Kaunas Picture Gallery will present Gradual Loss of Vision, a work that touches upon sensitive political questions.

How would you present yourself Briefly, what is the most important for you?
Usually I introduce myself as an artist and filmmaker. But I’m also involved in curatorial activities and write critical essays.

Why did you become an artist? Why did art interest you? How did you begin your work?
I was born in a family of artists (my father is a sculptor and my mother is an art teacher who works with kids). After high school I studied in the art academy in Kharkiv (my home town). It is a very conservative academy like all the state art academies in Ukraine. Such context pushed me to self-educate and provoked in me a desire to make art as protest towards the existing educational system. That time I also met Boris Mikhailov, who was a persona non grataat the academy but a respectable figure in the international contemporary art world. Communication with him was like an alternative education. Being a student of the sculpture department, my first steps were in performance, video and photography. In parallel, my friends – young artists and art historians – and I established an artist-run space called SOSka, which was an active self-organized institution in Kharkiv for seven years (2005-2012).

In your work you reflect on social and political realities. Why does this topic interest you?
It is not possible to stay outside of social and political reality. It influences the life of any individual, especially today. People consume political propaganda every day through social networks, TV and even popular cinema. The meaning of propaganda is large: it is everything which narrows the space of our choice and manipulates our desires (when we buy something or when we vote on elections, etc.). In this relation, art is the opposite phenomenon – it doesn’t offer  prepared answers but can pose questions. From my perspective, it is a tool of doubt which provokes critical reflection through emotions.

What inspires you?
It’s difficult to say anything about inspiration in relation to my artistic practice. I rather react to reality in certain ways and try to reflect, to analyze, to problematize it. But sometimes  dreams, rather than reality, give me ideas. Basically, dreams are reality too but transformed into a certain fantastic vision through the subconscious mind. Unfortunately, people often don’t pay too much attention to them and our memory erases them very quickly.

In your work Gradual Loss of Visionthere is a link with ‘hot spots’. What does war mean to you?
The Gradual Loss of Visionseries includes a number of out-of-focus images with geographical maps of territories of unclear political status. Among them are Crimea, Abkhazia, South Ossetia, Nagorno-Karabakh and Transnistria. They combine a series of schemes and notes explaining such terms as field of vision, peripheral vision changes and eye exercises. This series is basically a continuation of the previous one,  Blind Spot, where I used the phenomenon of physical blindness as a symbol for our society in a state of media war. Both series express a critical statement about how people mechanically follow the reality designed by the media and the social blindness imposed by the propaganda of war, which creates a polarized vision of reality, dividing society into ‘us’ and ‘them’, ‘ours’ and ‘theirs’.

Your project for the 12th Kaunas Biennial is about Ester Lurie. Could you tell us more about it? What are the most interesting details in the process of creating this project?
I was inspired not only by the works of Ester Lurie but also by the story of her life. Lurie was lucky to survive the Holocaust, and she documented everyday life of the Jewish ghetto in Kaunas. You don’t see the moments of brutality and death in her drawings. But you can observe some things that precede (like deportation) or follow (like the results of the pogroms). But what particularly struck me is the semi-mythical story about how some of her works were hidden and lost. According to evidence, she hid the drawings in ceramic pots and buried them in the ground to conceal them from the Nazis. Nevertheless, they were never found, and this story became legend. I decided to hide the images of her works in the installation, which consists of ceramic pots human size. Ceramic was chosen as a material because of the long craft tradition that characterizes the city of Kaunas along with its textile industry. Visitors can only spot the drawings through small peepholes on the pots’ surfaces. That’s an important symbolic interactive gesture to me because the work represents something which stands in a shadow. The hidden position for private evidence of the Holocaust problematizes ideas of displacement, forgetting, and removal by and from official narratives in different periods of history.

Why are you interested in Jewish history and memory?
I never worked with Jewish issues before, though I have Jewish roots myself. Jewish identity was problematic in Soviet Ukraine because of the anti-Semitic state policy and domestic antisemitism. In the post-war decades the Holocaust didn’t exist in official Soviet history. Today, the official perspective towards the massacre of the Jews during WWII is very problematic too. Part of Ukrainian society supported the Nazis and helped them to kill Jewish people. The recognition of this compunction is missed in the official historical narrative. Non-Jewish Ukrainians also suffered under the Nazis, but it seems that the victimization of Ukrainian society is more important than its responsibility. My research in the policies of historical memory in post-Soviet countries, including Lithuania, confirmed the similarity of the process. There are skeletons in the closets of all these areas, and it’s important to talk about them within the perspective of art.

How does this new project for the Kaunas Biennial reflect other themes you are working with? Does it have something in common with your previous work? The theme of the Kaunas Biennial is travel. What does travel mean for you personally, whether physical travel or mental travel, as a process or a term?
Esther Lurie’s drawings embody the dark side of Kaunas history and the Jewish minority. The monumental shape of the pots gives a public and political dimension to fragile objects. The permanent location of the work – the Kaunas Railway Station – underlines the dramatic idea of baggage which a traveler is not allowed to take on a journey, baggage which can cost a life. This work is connected with my previous works like the Gradual Loss of Visionor Blind Spotin the sense of how vision or the way of seeing can be political.  Each of these works consist of a visual element which is difficult to discern or find. And that element is always something unseen, unrepresented or undiscussed in society. A certain lack of vision is connected with obstacles created by manipulation, which are in turn created by political and business elites.

In Blind Spotviolent images of war are hidden under a layer of black ink; in Gradual Loss of Visionshapes of disputed territories are out of focus; and in the new work Esther Lurie’s drawings are visible only through a small hole made in ceramic pots. Through this theme of obstacles, Lost Baggageis also connected with another previous work called Wrong Connection. This work was an installation in a public square in Lublin. Railways created an obstacle on the way to the city council building. The main idea was to illustrate the obstacles created by borders, which has become an increasingly crucial problem today in regard to rising intolerance towards migrants in the EU.

What do you hope visitors will get from the upcoming 12th Kaunas Biennial?
My work for the 12th Kaunas Biennial touches on serious issues in a playful manner. It implies interaction with the audience. While it problematizes uncomfortable political issues, I hope visitors will understand it in the right way. People often tend to worry only about their own problems: their own home, yard or nation, but not the problems of the “other”. Sometimes that leads to tragic events when the “other” is a minority and society chooses the side of the majority. Jews have been and still are the minority in Lithuania, and I hope that my work clearly states that minorities are not the enemy – they are a part of society and the country.