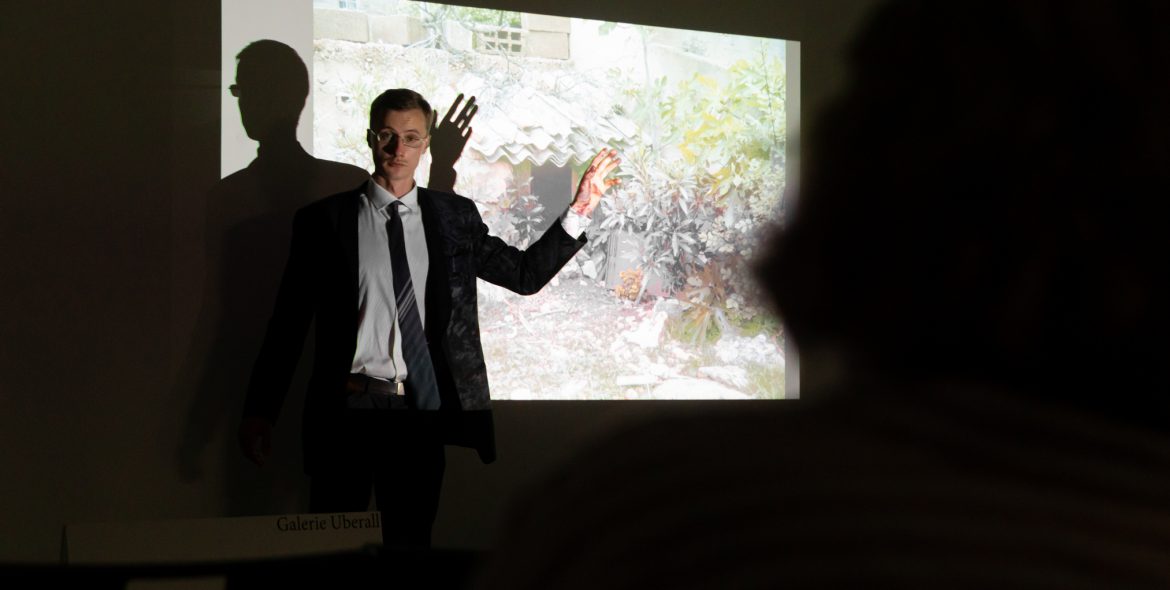 12th Kaunas Biennial titled “After Leaving | Before Arriving” has partnered with Galerie Uberall directors, artists, leading businessmen and art dealers, to deliver elements of its public programme both in Lithuania and internationally. At Emalin in London Galerie Uberall Directors raised a series of questions about the processes involved in the biennial. Inviting feedback from London audiences, they attempted to answer the most intriguing question: what exactly does “After Leaving | Before Arriving” mean? The performance by Galerie Uberall Directors follows an introduction by curator Elisabeth Del Prete on the curatorial concept and methodology of the biennial.

Blurring the boundaries between the role of the artist, gallerist and curator, and often challenging the public’s expectations, Galerie Uberall Directors used the performance lecture format to present their humorous interpretation of the biennial concept. The presentation included Galerie Uberall’s contract with 12th Kaunas Biennial as “official sponsors”, which documented their financial support of the biennial amounting to 1 € . The presentation continued with a number of images of the alleged “artworks” in the biennial, which appeared more like found objects (a car wheel, an empty sandwich board, a street sign), rather than works intentionally authored by creative practitioners. By elevating objects from the streets of Kaunas to artworks, and with similar provocations throughout the performance, Galerie Uberall Directors ironically questioned the audience’s assumptions around contemporary art biennials.

Galerie Uberall
Galerie Uberall, one of the first private mobile galleries, was founded in 2014 and since then has traveled and exhibited internationally, including viennacontemporary (Vienna 2015), documenta 14 (Athens, 2017), MUMOK Hofstallungen (Vienna), Startup Fair (Vilnius, 2018), and VDU 101 (Kaunas 2018).