curator Elisabeth del Prete: ‘The biennial draws specifically on the history of the city of Kau-nas as well as Lithuania to comment on ideas of passage and transition’ 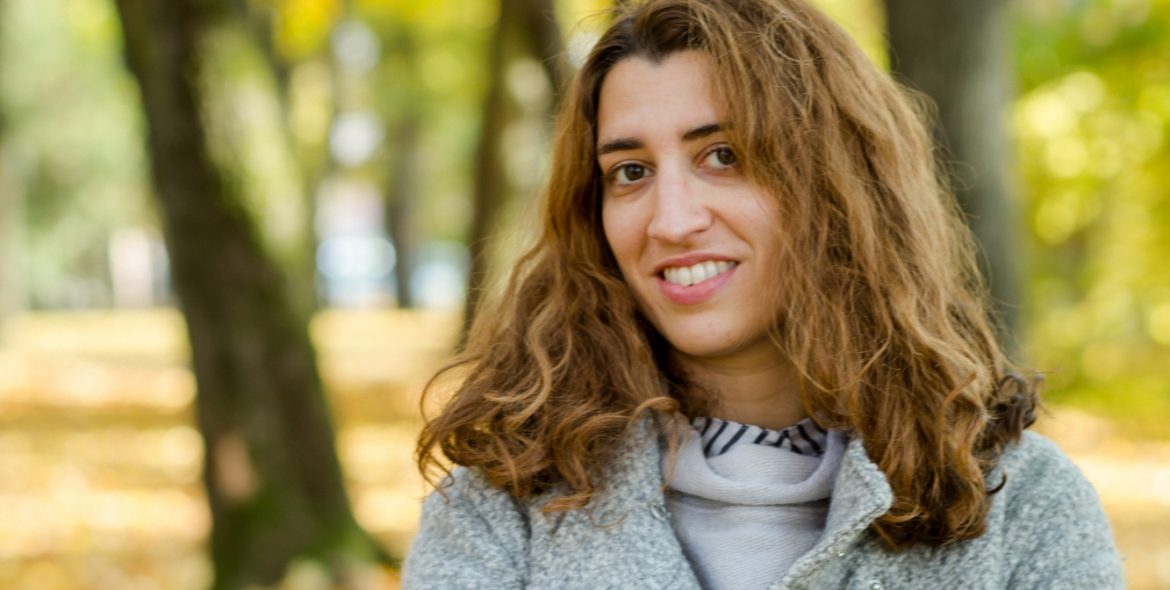 Elisabeth del Prete is one of the five curators of this year’s Kaunas Biennial AFTER LEAVING | BEFORE ARRIVING. Engaged in a wide range of activities, from curating exhibitions to providing a learning programme for artists that are developing community projects, Elisabeth del Prete concentrates on participatory, collaborative and accessibility aspects in her practice. In the following interview the London-based curator shares her thoughts on the challenges of the local context, the knowledge gained about Kaunas and Lithuanian history and architecture, and the questions presented by art in public spaces.

How would you define your own curatorial practice? What subjects and methods do you find most interesting as a curator?
As a curator I enjoy identifying methodologies that allow me to work from specific conditions and to curate contexts as well as content by bringing relevance, participation and self-reflection to each project. To put it simply, I try to work with what is already there, with what a context already offers, and find ways to make this accessible to the public in a participatory way.

You’re the learning curator at UP Projects, which unites curators, educators and artists in order to co-create with communities. Could you tell us more about the project and the learning programme it provides?
At UP Projects I am mainly interested in alternative forms of learning as well as participatory and non-hierarchical forms of knowledge production through programming activities. Over the past year in London I have been working on a research and development programme for artists called Constellations. Each iteration of Constellations runs for one year and brings together eight emerging artists with an interest in socio-political issues and public contexts. The artists attend a number of workshops led by cultural practitioners who are experienced in these areas. For this year’s workshops I have had the pleasure of working with practitioners including Samaneh Moafi from Forensic Architecture, Daniel Fernández Pascual and Alon Schwabe from Cooking Sections, Torange Khonsari from Public Works and Kathrin Böhm as well as many others. In addition to Constellations and drawing from the legacy of the Artist Placement Group and Joseph Beuys’s idea of social sculpture, I am in the process of finalising a learning strategy for UP Projects that aims to challenge the meaning of the word learning while questioning who the learning is for.

In your essay ‘Step Inside Your Comfort Zone’ published in the book Collective Bodyby the Institute of Contemporary Art in London, England, you discuss collaboration between artists, curators and members of the public. What are the challenges that come with this type of collaboration?
I would say there are two main challenges to this approach: how do you create an activity and an environment where members of the audience, often people you do not know personally and who do not know each other, feel comfortable participating, speaking out, conversing and discussing in a public context? The second challenge is that there is an element of control that as curators and artists we might have to learn to let go of. What if members of the public express forms of criticism or negative feedback during the event? I think that if you encourage audiences to go beyond the passive role of ‘listeners’ by creating a framework for participation, criticism becomes not only inevitable but actually quite healthy.

UP Projects curates and commissions contemporary art for public spaces. Part of the 12th Kaunas Biennial also takes place in public spaces and offers a wide range of temporary installations in the city. In what ways, do you think, is public art capable of changing the public realm? How does it work in this year’s Kaunas biennial?
The public realm presents artists with complex conditions that are often not taught at art school and which require a lot of thinking and negotiating. I personally don’t think that public art alone is capable of changing the public realm as such. However, I think it can be a very exciting opportunity for artists to challenge the meaning of the word ‘public’, identify their roles within local communities, comment on predetermined conditions and influence the public’s thinking and behaviour around a site. The 12th Kaunas Biennial presents a number of works by artists such as Andrej Polukord, Robertas Narkus, Alberto Garutti and Christian Jankowski, who have intervened in the public realm in the train station, at the bus station, in the park, on the motorway as well as on the streets. Each one of these works raises questions about publicness in a different way while also being strategically located along the route that connects the Kaunas Picture Gallery to the train station, thus creating visual links between various sites.

How can a work that is so publicly exposed evoke such intimate thoughts and memories? Alberto Garutti’s Every step I have taken in my life has led me here, nowis located in five different sites: in the bus station, in the train station and on the stairs in front of Kaunas Picture Gallery. As the plaque is the same colour of the pavement where it is installed, the work is very subtle but impossible to forget.

The new commission for the 12th Kaunas Biennial by Andrej Polukord at the bus station questions if the word public refers to ideas of accessibility (i.e. is the site publicly accessible?) or ownership (i.e. is the site publicly owned?), or both. To buy or not to buy is a pedestrian passageway located in a shop with two opposite entrances inside the bus station. By playing with the double meaning of the word ‘public’, the work creates a fictional public passage inside a private commercial space. I find the work particularly on point as, through a simple intervention, the work is able to change our perception of a space and therefore our behaviour. How does our agency change within a privately owned space compared to that of a publicly owned one? What sets of invisible rules can influence my behaviour?

With Dépendance, Robertas Narkus’s new commission in Kaunas Old Cemetery (also known as Serenity Park) the artist distances himself from that idea that public art is used as a catalyst for consensus (whether religious, cultural, national or ideological). Integrating a number of disused airport runway lights in a sculptural pavilion, the work is located on a site that originally functioned as a cemetery for the Catholic, Orthodox, Evangelical and Muslim communities. With strong metaphorical references to ideas of orientation, guidance and direction manifested through the use of landing lights, the work cannot be separated from its context. Here Dépendancesimply acts as a meeting point for local residents and communities without imposing any specific meaning or agenda on the structure.

My new proposalby Christian Jankowski is installed on two billboards between Vilnius and Kaunas as well as on a billboard in front of the train station. Intending to send the audience on a transformative journey, the work sets out to ask the public the very same question that had been posed to him by one of the biennial’s curators: ‘We would like to ask you to have another idea’.

In this year’s Kaunas Biennial, you’ve collaborated with four other curators. What challenges and discoveries did doing so bring you along the way? After all, you all come from different backgrounds and live in different times zones, both literally and metaphorically.
Working with four other curators on the biennial has been sometimes challenging yet an extremely rewarding experience. We all came to the biennial with different interests and backgrounds, but luckily, we were somehow able to identify each other’s strengths quite early on in the process and take advantage of our difference perspectives rather than focusing on where our interests would clash. I think this became one of the strengths of our approach, which we later integrated as part of the curatorial statement. As a five-piece collective working in different European cities and in the company of 28 international artists, we avoided a unilateral curatorial approach and instead created a multiplicity of perspectives based on our different readings of the city of Kaunas. We created a metaphorical parallel between our collective curatorial approach and the late modernist architecture of the Kaunas Picture Gallery building (one of the main sites of the biennial), which favours multiple perspectives, freeing itself from the ideological constraints of a unified vision as prescribed by the singular representative facades of the city’s interwar and Soviet period architecture. The building was designed in the late ‘70s to be accessed from different entrances and fully observed from all the perspectives and sides, even from the roof and the back of the building. Our curatorial methodology of dialogue therefore hopes to perform the very same architectural intention of the Kaunas Picture Gallery.

This year’s Kaunas Biennial focuses on the notion of the journey as a metaphor for everchanging cultural identity of the city with complex past. What aspects of Kaunas history did you try to capture in the exposition?
The biennial draws specifically on the history of the city of Kaunas as well as Lithuania to comment on ideas of passage and transition. Despite the oppressions that have characterised its history during the 20th century, with occupations from the Soviet and Nazi regimes, Lithuania has maintained a strong sense of national identity. By focusing on the changing architectural landscape in the city of Kaunas over the course of the century, the biennial focuses specifically on nation building and on the way in which architecture as well as art can perform, validate and/or subvert different political agendas.

What were the biggest challenges you faced while working in the local context of a place that you barely know?
How do we curate an exhibition that is relevant to both the international audience and the local public? The biennial is a model that, by definition, is relevant internationally, so the main challenge became apparent very quickly: how do we speak to the local audience in a way that is meaningful and relevant? How best to curate content as well as context? We therefore decided to use the history of the city as a narrative to comment on the changing political landscape. Our approach was strongly informed by a number of tours of the city led by Paulius Tautvydas Laurinaitis as well as by our collaboration with architect Linas Lapinskas. Both of these individuals have turned out to be invaluable sources informing our thinking on how to address the local context. In addition, one of the curators, Neringa Stoškutė, provided the group with crucial insights and perspectives, ensuring the collective’s thinking remained on point so that no assumptions were made about the local culture.

What did you find most interesting in Kaunas, or Lithuania, during the preparation for 12th Kaunas Biennial?
In the lead-up to the biennial I became increasingly aware of the country’s history and its role in the current geopolitical context, especially in Europe.

Why would you recommend taking a journey to visit the 12th Kaunas Biennial?
By visiting the biennial, which includes interventions by 28 artists, you will also experience the history of this former capital city through its monumental modernist architecture.