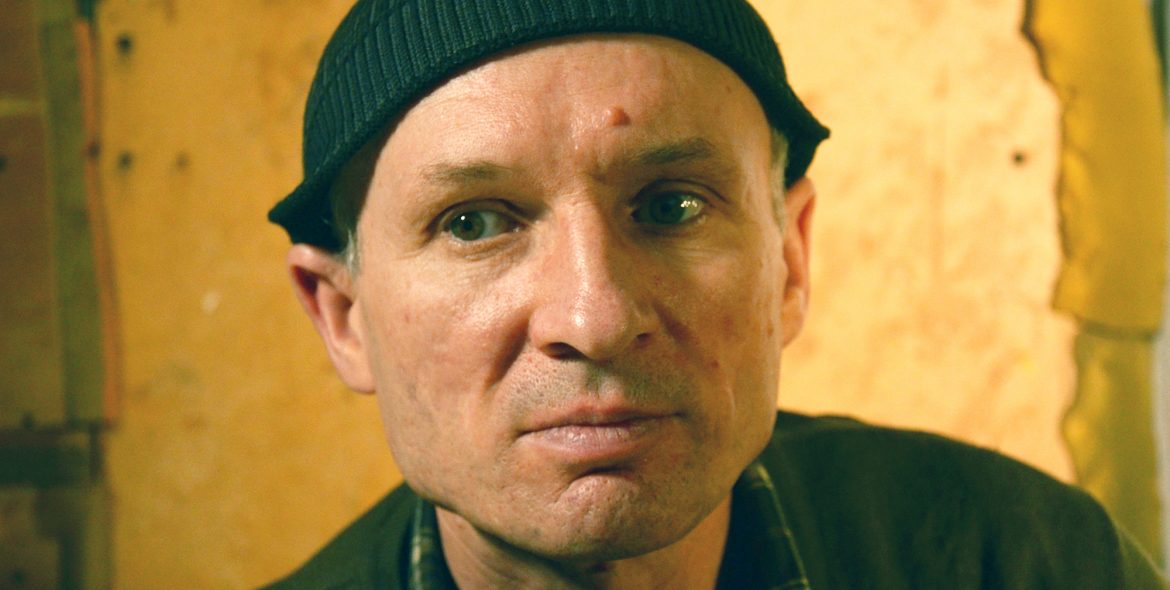 Extravagant Moldovan artist Ghenadie Popescu has walked several hundred kilometers during his performances. The body of his work is diverse and distinctive and raises many questions, those of a  political nature in particular. In the following conversation, Ghenadie Popescu shares his thoughts on his artistic wanderings, his very first costume and the documentation of a performance that is now being showcased at the 12th Kaunas Biennial AFTER LEAVING | BEFORE ARRIVING.

Before you started to make art, you tried to join the marines, made helicopters in the army and worked in the fields. How did you first become interested in art?
It was in the middle of 1990s, a time of cruel poverty. I turned twenty-five. I was working in a former kolkhoz. It was called a ‘community farm’, but it was more or less the same thing as a kolkhoz. I was doing peasant work. There was literally no entertainment. I felt the need to change that. So, I decided to sketch certain images or situations that I thought were funny in some way – a portrait of my brother, for example. There was no paper whatsoever, I recollect, but fortunately my sister was working as an assistant in our village school. They were dumping old physics posters. She decided to bring them home, thus positively reinforcing my drawing attempts. My pencil sketches on the reverse of the old school physics posters multiplied. These were my first attempts to learn visual grammar. At some point I felt a real necessity to know what was going on in the realm of art. I would swallow everything connected to the history of visual arts. The village library was quite limited in such literature. And I had to leave the farm to look for more.

It seems like most of your body of work is very much based on politics. Why do you find political subjects interesting to work on?
In order to answer your question, I would like first to stress the irritation I experience when I face the machinery of politics. It affects me in a visceral way. It is material. I feel it  somewhere deep inside, as an opposition to what is usually understood as inspiration. Inspiration is usually something that is linked to the creation of beauty, of the sublime – irritation is creating a state of pain. Through my works I try to find ways to cope with this pain, to reclaim my balance by taming this irritation, by transforming the reality that I face, in fact that we all face, because we are all part of politics – into ironies, soft pain killers.

A few years ago, you made the performance series entitled Mea(Mine) during which you travelled by foot across the country all around Transnistria, a very particular part of Moldova next to the Ukrainian boarder. Could you tell us more about it?
The Transnistrian segment was the last one of these wheelbarrow performances that lasted three summer seasons between 2009-2011. The performance was about freedom and all its symbolic derivates, especially vacations, which can be conceptualized as free time sanctioned by law. It is almost sacred. When my parents had these kinds of breaks from their jobs they quite often spent their time repairing our house or doing other things that required adjustments. The wheelbarrow was a tool they often used during these times.

So, the performances were done during my summer vacations. There was a natural continuity in this and a sense of comfort, which allowed me to focus on certain issues that interested me as an artist. The main thing was an attempt to probe the hidden meaning behind the colours of a national flag. The wheelbarrow was painted yellow and I had two red- and blue-coloured raffia bags in it. I was also interested to what extent these colours correlate to the search for a person’s ethnic identity, although it was an experiment done mainly with the inhabitants of Moldova and Ukraine. Secondly, I was playing with the concept of slavery, which is in opposition to freedom. In Romanian the word wheelbarrow – roabă– is a homonym with “female slave”. I was always fascinated about how humans can’t stop working and by how they are slaves to their own continuous work. I was also there pushing my working tool – my slave, working hard in the summer heat for no apparent reason. They were mostly blind to the tricoloured symbol I was pushing; however, they read my work in their own way. The most frequent question I got was if the wheelbarrow was for sale. This sequel of performances was titled Mine– the possessive pronoun, feminine in Romanian, because I was referring to the extent of my relationship with a series of concepts and objects that in Romanian are all feminine – wheelbarrow, country, freedom.

The Transnistrian part lasted six days. It started in the town of Camenca and finished in Dnestrovsk. What was interesting on this particular road was that the government of the self-proclaimed republic of Transnistria does not accept the new Moldovan tricolour. They use the former Soviet Moldovan flag – a green line on a red background – and the blue-yellow and red pattern is almost impossible to find in the public space. And there I was parading with a tricolour out there in the open, through Transnistria. The people from this region had a similarly developed business sense as their neighbours. They also wanted to buy my wheelbarrow. The local police, however, were much more inquisitive. They stopped me on a couple of occasions and checked my papers. They were, of course, curious about what I was doing because they kept seeing me while they were patrolling. I kept telling them that I was writing a book about cheap travel and I was doing research for it, which was not so far from the truth.

It must have been challenging to travel such long distances all by yourself.
In fact, these kinds of practises are suit my way of being. I felt like a fish in water. Walking is, in fact, self-therapy. When I tell stories about my walks, I usually use the metaphor of the longevity of energy accumulators. In order for them to function longer, all the energy that is stored in them must be released once in a while. These walks are this kind of activity for my mind. I release all the toxic thoughts from my mind and body. I feel fully recovered after them and able to face my daily routine.

I am not so much a recluse. In fact, I was accompanied by somebody several times. However, most often I do it alone simply because I do not identify a potential partner to join me. And I am not the best person to convince others to join me in such time- and energy-consuming actions.

I would rather emphasise my regrets and not the challenges here. People imagine that these actions are quite lengthy. I, on the other hand, feel that I always lack time. They finish too quickly. I only accomplish a small part of what I originally planned. If I were to use the language of artists, I would say that during these walks I only have the time to make the sketches for a big painting.

During your performances you usually wear a suit made of plastic market bags that were once popular in Eastern European countries. Why did you choose to make your performative clothes out of them?
I have never had a suit in my adult life. I mean that kind of garment required for high-level public gatherings. First, I have hated formal clothing since my childhood. I always thought that it looked ridiculous and that it severely limited my movements. On the other hand, a suit plus a necktie is a compulsory wrapping for the practice of obedience. It is the uniform of different categories of people who choose the comfort of slavery.

At some point it was difficult to cope without a suit, talking about the reclusive me. I felt an urge to rank among others. I needed to get a suit. It was a serious matter and I could entrust it to no one. I had to sew it myself. My choice for the fabric was plastic market bags. They are cheap and represent our times acutely, so a suit made of these bags was a fashionable choice. Let’s not forget that plastic is a very resistant material. And, of course, such a suit is ridiculous, which is important.

Mămăligă, a traditional Moldavian dish, plays an important part in your body of work. Many of your sculptures are literally covered with mămăligă. What is the meaning behind this choice of material?
Mămăliga, corn flour porridge,  is a part of many local folk and cultural themes, being the basic meal of Moldovan peasants, but you can also find it on the menus of the fanciest minimalist restaurants. In our region it comes with a huge baggage of symbols and meanings, which means it is also a very inviting material. It tells you, “Take me!” I used it while working on remakes of certain objects or ideas by grafting this added value onto them.

Besides working in performance art and making sculptures, you also create stop-motion animation. What do you find most interesting with this media?
I arrived at stop-motion naturally, already having experience in video editing, object making, painting, sculpture and movement. It was also my childhood dream, kind of. The advances in digital technologies have made it possible for an individual to cover the entire production process. What fascinates me with this form is a different feeling of time that comes to life when I work with stop motion. It is almost like an immersion in an ‘Alice in Wonderland’ kind of situation. It is so very different and you need to watch your steps very carefully.  It is like you have a seed, a tiny little ball. You put it into soil, you plant it. And things around you start to change because you must watch and keep your hand above the buried seed. This is the condition for growth – the proximity of your fingers and your gaze on it. That’s all you need to do. It takes months and years of small changes in the position of your fingers. If you take a break it stops growing. Long breaks are not recommended. Finally, you get fruit full of seeds inside, which looks like the seed you planted, but the fruit you grew somehow resembles your fingers.

The documentation of your performance In-between is now showcased in the  12th Kaunas Biennial. What is it about and where did it take place?
Such spaces between two doors were quite common for old Soviet buildings. They were designed to keep the cold out. When I filmed, I used such a space that was located in the Administration Office of the Ethnographic Museum in Chisinau. People who passed through were mostly my work colleagues. The work is a visual equivalent, a metaphor of how I think the country I live in is in relation to big Western and Eastern powers. The only thing I was able to do, as an insider, was to try to keep the doors closed – call it independence, sovereignty, whatever. This was the only thing I had the energy for and, in fact, the only thing that the people passing through expected from me.