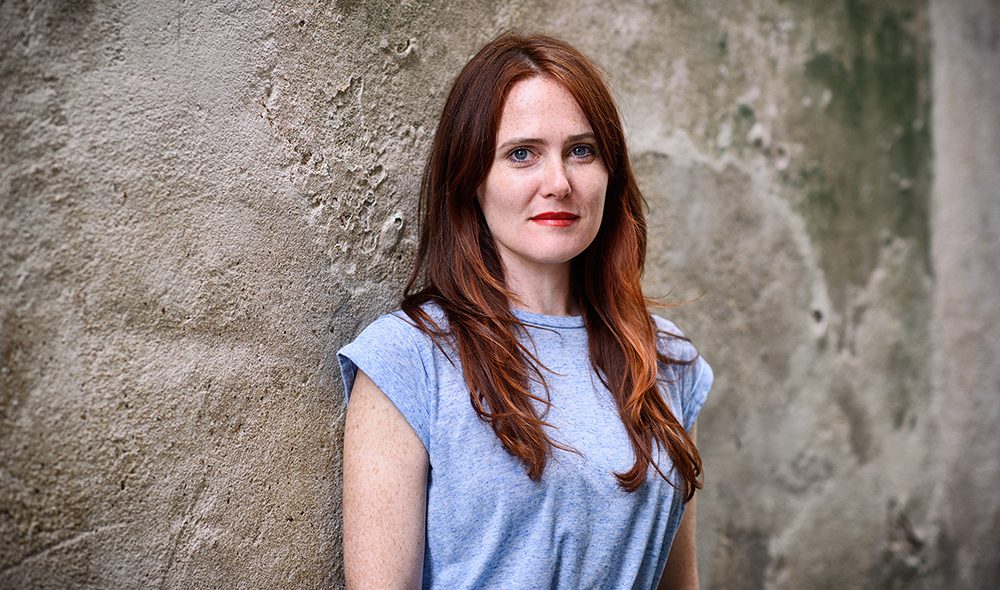 Italian artist Francesca Grilli often collaborates with very diverse and sometimes marginalized people, invites them to face their limitations and encourages them to disregard them in her performances. During the opening weekend of the 12thKaunas Biennial AFTER LEAVING | BEFORE ARRIVING the artist presented a performance at Kaunas Artists’ House, the video of which is now being showcased in Kaunas Picture Gallery. In the following conversation, the artist shares her thoughts on the complex themes that she chooses to develop and experiences that transcend borders.

You began as a photographer and then developed a more performative way to work. How did this switch happen?
I have a degree in photography, and at the very beginning of my career my work was based on my photography experience. Now I’m working with mixed media. I mainly focus on performance art, but I also make films, photos and installations. I did my first performance in 2006 when my grandmother passed away. It was a spontaneous gesture which was based on one image, that of a dancing elderly couple. The performance was called Arriverà e ci coglierà di sorpresa(It will come and take us by surprise), and it was performed by 75-year-old dancers who danced the tango for three hours. It had a strong connection with the concept of the death. The couple danced for a long time, which became a three-dimensional image. My performances still start as images that gradually become more alive.

It’s quite interesting that some of your performances can only be experienced through video documentation. Furthermore, in some case, it seems that the absence of the audience is almost a must, as inArriverà e ci coglierà di sorpresa(2006), where elderly dancers perform in an empty hall, or in Enduring Midnight(2007), where an opera singer sings alone in the middle of the night. What is your relation to the audience when it comes to your performances?
In some videos of my performances, the viewer can’t see the audience, because I want to preserve the pureness of the action. However, the audience is always there, even if it sometimes feels like you’re watching the performance alone. It very much depends on what is being performed.

In your performative practice, you focus on such themes as the resistance of the body to physical limitations or age. For instance, in the performance Moth(2009) you collaborated with a singer with albinism, in La Terza Conversazione(The Third Conversation, 2008) a deaf musician became the protagonist of the performance, and for Arriverà e ci coglierà di sorpresa(2006) you invited two elderly dancers to tango. Could you tell us a little more about the subject of the resilient body and your approach to it?
It’s a concept that I really like and my current work is still based on it. I’m interested in people with physical limitations: blind people, those with albinism, the elderly, etc. At the very beginning of my career I worked with them to have them face their limitations. Of course, not in a violent way, but gently. I started conversations with them that sometimes took years to develop. I gently asked the questions that you don’t really ask in these kind of communities. For example, once I worked with a deaf singer who wouldn’t speak even though he was able to. He used sign language to communicate. For deaf people it’s almost a political choice. So, I talked to him about listening to music and if he loses something for not being able to do so. I asked him if we could find a way to listen to music together. It was all about building trust.

Recently, my interest in resistance to physical limitations switched to biographies and psychological conditions. For instance, the performance called The Forgetting of Air, which I present at the 12th Kaunas Biennial, is more about personal histories. It’s based on the concept of sharing the same air with foreigners from various countries. Air is something you can’t really control. It’s a limitation for everybody and to nobody at the same time.

This year’s Kaunas Biennial showcases the video documentation of the performance The Forgetting of Air, which took place during the biennial’s opening weekend at Kaunas Artists’ House, but earlier this performance took place in other locations around Europe. How did you first come up with the idea for this performance?
My home country has been facing a horrible refugee crisis for about a decade now. In 2016 I was commissioned to create a performance for the MAXXI museum in Rome, Italy. I had the freedom to say whatever I wanted to say, so I conceived a performance about refugees. I had a feeling that Italy was the gate to Europe, in a way. I wanted to put this subject on a proper stage, and MAXXI seemed like the right place for that. Later, the performance was presented at other venues in other countries. Every time I move the performance I must embrace the situation of immigration in that particular country. Every city has a different story. In this performance I always involve foreign people living in the country where the performance takes place. They could be refugees or immigrants. These days, with the prevalence of the right-wing political wave, I find the presence of ‘the other’ very important.

You barely ever appear in your performances yourself, except for early performances that were based on rather personal experiences, or even involved your family members. Why?
I never appear on stage, but you can see me in some of my films. I don’t act in them, but I’m present. Performance art and video art speak different languages. Films are about narrative stories, while performances are about action. Films are more complex for storytelling and have a precise structure that I sometimes enter. However, somehow, I feel much more present in my performances, even if my body is not visible, because it’s my vision.

Sound very often plays a significant part in your artistic practice. Why?
From the very beginning of my career, sound was very important to me in every form. One of my earliest video works, 194.9 MHz,was about the fact that in my family it was forbidden to listen to music when in mourning. I think I work with music to bring back the joy or communication that was missing in my personal story. Music touches me deeply. However, I work not only with music, but with sound as well, like in The Forgetting of Air. There’s no music, but music is being created with breath. The sound of breath takes the spectator to another place. It might bring you to the sea, make you think about death or wind. The sound can really help the audience escape the building. It’s guiding you to another world.

This year’s Kaunas Biennial is based on the concept of the journey. What journeys do you find most interesting?
Let’s take The Forgetting of Air, for example. It is about countries that are facing the issue of immigration on different levels. The problem is very real. But I always like to add some poetry to my work. So even a political journey becomes a poetic one.

What souvenirs do you usually look for to take from your journeys?
I’m always looking for something kitschy or bizarre. I have an entire collection of souvenirs like this. Even when I come to a place for a serious project I feel the need to discover something kitschy that shows what is popular in the country or the city.

Did you find something like this in Lithuania?
Yes, I found a good charm necklace with a figurine of the man with an amber belly. It’s magical and kitschy at the same time.