Personal Jewish experience in a ‘box’: humour is about saying it’s all right to talk about it 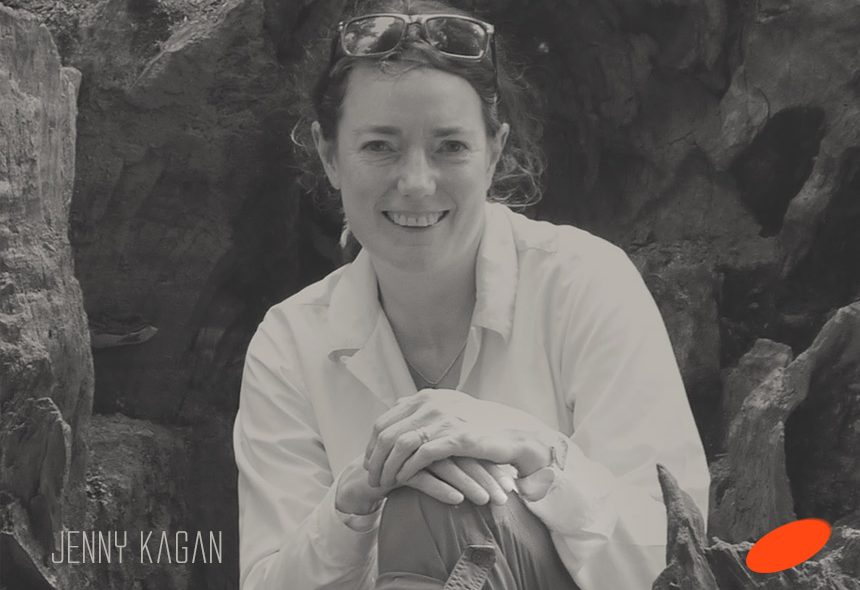 A multidisciplinary artist from England, Jenny Kagan believes that art can be found in the strangest of places and that its primary goal is to elicit emotion. She’s not afraid to speak about her parents’ painful experience in the Kaunas Ghetto during the Holocaust, one of the themes she’ll be addressing during this year’s Kaunas Biennial. We recently had a frank and amusing conversation with Jenny about the way she tells stories through her art and her interests in educational possibilities and experimentation within art.

Last year you held your first solo exhibition, Out of Darkness, in Halifax, UK, in which you retold the story of how your parents met, fell in love and survived the Kaunas Ghetto. In this project you combined different genres including site-specific theatre, interactive installations, private letters and projections. How did the idea to tell this story first arrive?

Originally I thought I was going to write a book, and whilst I was writing it I was also going to make some art to accompany it. I was a theatrical lighting designer for 20 years and I was looking for ways to translate that experience and knowledge into a different form. I was also doing a degree in drawing and as part of these studies I had to come up with a project. I decided to do it together with my mother about the time she and my father spent in hiding during the Second World War.

They were hiding in a place that they used to refer as a ‘box’. When I was younger I imagined it as a play box in which you keep your toys. As a teenager I visited the Anne Frank house in Amsterdam and I realised that this hiding place was actually quite big. Since I still didn’t know the exact size of the ‘box’ my parents were hiding in I decided to draw it with my mother’s help. Since she couldn’t understand the drawings, I started to make a little scale model of it and ended up building it to scale and asked my mother to come and see it. Once she did, she began experiencing everything all over again. It really struck me how much more of a dynamic experience it was than any book could ever be.

What challenges did you have to face during those five years preparing for the exhibition?

A lot of artists start with an object or an idea, and I started with the experience I wanted the person to have. I didn’t know how to make certain objects, so I did a lot of exploration into how to use materials and how to work with electronics. I used quite a lot of technology, but I didn’t want it to feel like it.

In Out of Darkness you invited visitors to perform various actions in order to gather the whole story piece by piece. What was the idea behind this?

I wanted people to have to perform an action in order to have an experience. A lot of the exhibition pieces are only active then the viewer is there, so the visitor becomes an almost hypnotic element of the work. One of the most obvious examples is the two-way mirror in front of the image of the Ghetto. When someone approaches it, they become a part of the image. But if nobody’s there, there’s no picture. It’s all about the visitor taking the journey that they’re in control of. There’s no right or wrong. It’s really just about engagement.

Even though it’s rather a sad and serious story to tell, it seems that there are some humorous elements in the work. What emotions do you try to evoke with your art?

Originally, I did a test showing in which I put the mirror piece at the start of the exhibition, right inside the entrance door. As soon as someone opened the door, they were right there. I thought this was a brilliant idea, but it turned out to be a disaster. People immediately shut down when faced with something like that straight away. Now, deliberately at the beginning of the show, there’s a suitcase to open that plays the drinking song from La Traviata whilst miniature Soviet tanks roll across the bottom. Although the subject matter remains serious, the treatment of it makes you smile. It’s about getting people to relax.

Then we’re talking about horrors, about which people tend to not want to listen. Humour’s about saying we’re here with different minds, so it’s all right, come on in. It’s like a pat on the hand.

I thought about it from the very start. I wasn’t certain how the kids were going to respond. We agreed that the show was for kids of up to eight years, but on the very first weekend we opened, we had a little girl of about seven. She went round with her aunt and then she went home and made her mum come. The next day she came back with her grandma. It was such a delight to see her engagement, and after that I relaxed, because I knew that all kids engage at their level.

The show operates on many levels and that was always the intention. For instance, we had a group of students with autism who came with their teacher. One of the pieces represents a story about my mother being held up against the wall by the Jewish partisans when she was thinking she was going to be shot. It’s a projection of my hands against a stone wall, and next to the projection there’s a gun. It’s always been there, because I thought some kids might want to pick it up. In the case of the kids with autistim, the teacher took the gun and got the boys to line up against the wall with their hands up underneath the projection, shouting: “How does this make you feel?” She knew her kids. That was the level of engagement they needed. There are lots of other opportunities to do it on a different level. The idea is that it’s a much more engaging way of teaching.

During this year’s Kaunas Biennial you’ll be working on several interactive projects related to the Jewish experience in the Kaunas Ghetto. What do you expect people to get out of participating in these projects?

This isn’t your first time in Kaunas? What do you think of it?

I feel quite at home here. It’s much more cosmopolitan now than it was when I first came here. Since the late 1980s the city’s undergone immense changes and it feels so much easier to interact here because so many more people speak English.

What message would you like to send to everyone in Kaunas and others around the world planning on visiting this year’s Biennial?

That they might see what’s there and what’s not there. I mean, that’s the title of this year’s Biennial. Like one of my projects suggests, art can be found in the strangest of places, in the most unexpected corners.