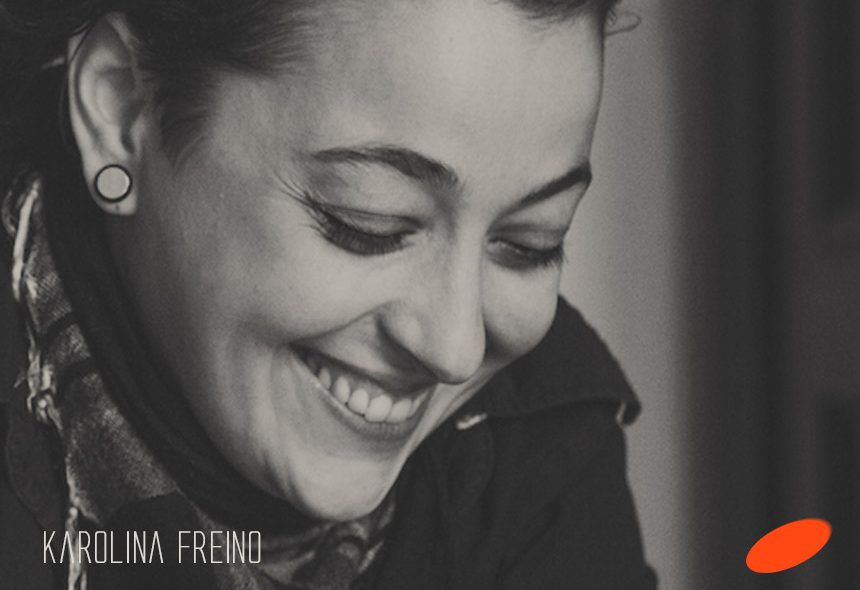 The Polish contemporary artist Karolina Freino is one of many artists whose work will appear at the Kaunas Biennial 2017. Her original use of history in her site-specific and public art projects is fascinating, and the way she displays her works, leaving conceptual riddles for the audience to figure out, is very interesting indeed. We recently spoke to Karolina about her art, inspirations and the overall aims of her work.

Could you briefly introduce yourself and tell us something about your artistic background?

I’m a visual artist working in the field of public and site-specific art for the past 10 years. I did a degree in Sculpture at the Academy of Fine Arts in Wrocław in Poland, which is where my interest in public space began. Then I took a year off and later moved to Weimar to study Public Art and New Artistic Strategies at the Bauhaus University.

You also spent some time as a student in Edinburgh in Scotland. How did all this international experience change your views on art?

I went to Scotland on a student exchange programme and I only stayed there for one term. It was  a time of inner development for me. Everything was different: colours, smells, language, culture, traditions. I was trying to work all of these things through and focus on the development of my own language as an artist.

In Weimar it was totally different. The two-year course I took there was attended by a very international group consisting of around 15 students. All of them came from different cultural contexts and brought their own personal and cultural aesthetic. We had a lot of classes and critique sessions together and we talked a lot about what each one of us was doing. It was an explosion of stimuli for me, a real time of cultural exchange, communication and community-building. The course itself was very much focused on public art and contemporary art strategies. It really moved me forward in terms of developing my own artistic strategy. Up until now, my work had consisted predominantly of realising site-specific, ephemeral interventions in the public sphere.

What does your creative process look like? What’s your inspiration in art?

There’s no common pattern for my inspiration. Sometimes it might be a sentence I heard or a picture I saw, a story someone told me or a broader social phenomenon I found. Generally, I like to go for walks and to somehow try and get a sense places I’m working in. I also try to catch as much as I can whilst talking to people. For example, once I was at an art residency in Turkey where I heard an interesting fact from a Venezuelan friend. She was learning Turkish by that time, and she told me that in Turkish grammar there’s a fairy tale tense which is not only used to write fairy tales but to re-tell stories that weren’t experienced directly by the narrator. It was a great starting point that inspired me to develop a project about the media and its miscellaneous manipulations. Or, for instance, once I went for a research trip to Katowice where I visited the city museum in which I heard a story about five different monuments that were built at the same spot in the city through the century. I found this example of political use of history very striking and later on it became the base for the development of the idea for my work called “Catarat”.

In your work ‘Rumour’ you invited viewers to reconsider historical power-hungry politicians and compare them with today’s ones. In ‘Cataract’ you suggested the remembrance of the historical changes of monuments. In ‘Chansons de Geste’ you talked about historically significant individuals’ ways of speaking. Why is history so important in your art?

It’s not a strategic choice. History just appeals to me, and it helps me recreate the specificity of the site. But I don’t use history just for the sake of remembering. I use the past as a metaphor to talk about contemporary issues. ‘Rumour’ and ‘Cataract’ are meant to do this. I also try not to be journalistic’ or too straightforward.

Is there any overall message you’re trying to communicate with your work?

I see my work as a kind of juxtaposition between the context of the site and of my personal background and life experience, but there’s no general statement that I try to convey through it. The only thing I could describe as containing a common thread would be my aim to make people think. My works often resemble some kind of conceptual riddles. I try to make them appealing as an image so that they oblige the viewers to make an effort when it comes to figuring them out. Their interpretations may differ from my initial thoughts and intentions, but I just want to give them the frame and the direction to construct meanings by themselves. My works need to be rebuilt in the consciousness of the viewer.

At this year’s Kaunas Biennial, artists will be speaking about public spaces and monuments. When Lithuania broke free from the Soviet Union in 1990, we quickly got rid of all the monuments that had anything to do with Communist ideology. We rebuilt most of our old national monuments that the Soviets had destroyed and erected some new ones, albeit in the same old style. Nowadays there are very few contemporary monuments in our country. What’s it like in Poland? Do you face the same issues?

The situation in Poland seems to be similar. Nearly all ideological monuments were pulled down and their replacements are generally conservative in form, mostly figurative and often of quite low quality. In my opinion, in terms of abstract thinking we’ve actually regressed compared to – for example 1960s or 1970s. Of course, the architecture that still exists speaks about the time of its own origins and I’m glad that there’s some consciousness rising now and we’re starting to protect good examples of modernist architecture instead of demolishing it or rebuilding it in a nasty way.

How should the Lithuanians and the Poles ensure that contemporary monuments are built in their public spaces? Do you think that it’s a question of different generations?

If we want to see changes among young people we have to invest in their education. Nothing will change if we don’t start talking about art with kids in schools and encourage them to develop their own creativity. People just don’t have the tools to understand modern art and intuition isn’t always enough.

In Poland at the moment nearly all public art institutions, museums and galleries have educational programs for kids and teenagers, but it’s just an attempt to fill the painful system gap that exists in the field of education. If the whole system isn’t changed, nothing will ever get better.

The concept of public space has changed a lot throughout the centuries. What does it mean nowadays and what role does visual art play in public spaces?

It’s been changing together with our cultural, social and political consciousness. Today, clear divisions between public and private are not valid anymore, due to privatisation of space on the one hand and the discovery that ‘private is political’ on the other. The media, reality shows and virtual life on the Internet blur the boundaries between public and the private even more.

The concept of public space interferes with the public sphere which is a much broader notion that embrace the immaterial, symbolic sphere, cultural specificity and mentality. Art can seek its role in this field, because of its meaning in the intangible sphere of people’s hearts and minds.

Changing and creating new shared images, emotions and ideas means transforming the very symbolic field of our public life, and therefore becoming political. In this sense, art remains one of the channels we can shape our common sphere through.