Confluence. A Monument to Emma Goldman. 2017 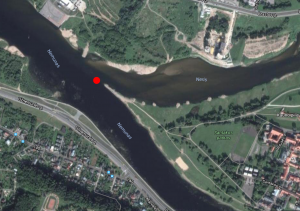 Confluence. A Monument to Emma Goldman. 2017

To read the text flashed in Morse code go to www.goldman.bienale.lt

Emma Goldman (1869-1940) – the iconic figure of the fight for women’s rights and social justice, as well as of the anarchist movement – was born in Kaunas, in a Jewish family. It is said that her farther hoped desperately for a son; for him a daughter would be a sign of failure. She spent the first seven years of her life in Lithuania and emigrated to the United States in 1885, where she became a political activist and writer, devoting her life to the fight for freedom in its different aspects. She spoke out against patriarchal and religious dogmas, and advocated for birth control and women’s independence. She was an anti-capitalist, and a renowned lecturer on anarchist philosophy, equality of the sexes, freedom of speech, and other social issues, attracting crowds of thousands.

Karolina Freino locates her Monument to Emma Goldman at the confluence of the Nemunas and Neris rivers in Kaunas – the site relates to the power of unity and solidarity that was one of the key aspects of Goldman’s ideas. It is in the form of a buoy with a beacon that continuously flashes out Living My Life – the autobiography by Goldman, translated into Morse code. The live process of the translation, letter by letter, is visible online at www.goldman.bienale.lt. The monument’s ephemeral, somehow distanced appearance relates to Goldman’s meagre presence in contemporary Lithuanian public sphere, although its form – relating to a navigating function – indicates a potential for discovering some guidance in her thoughts.