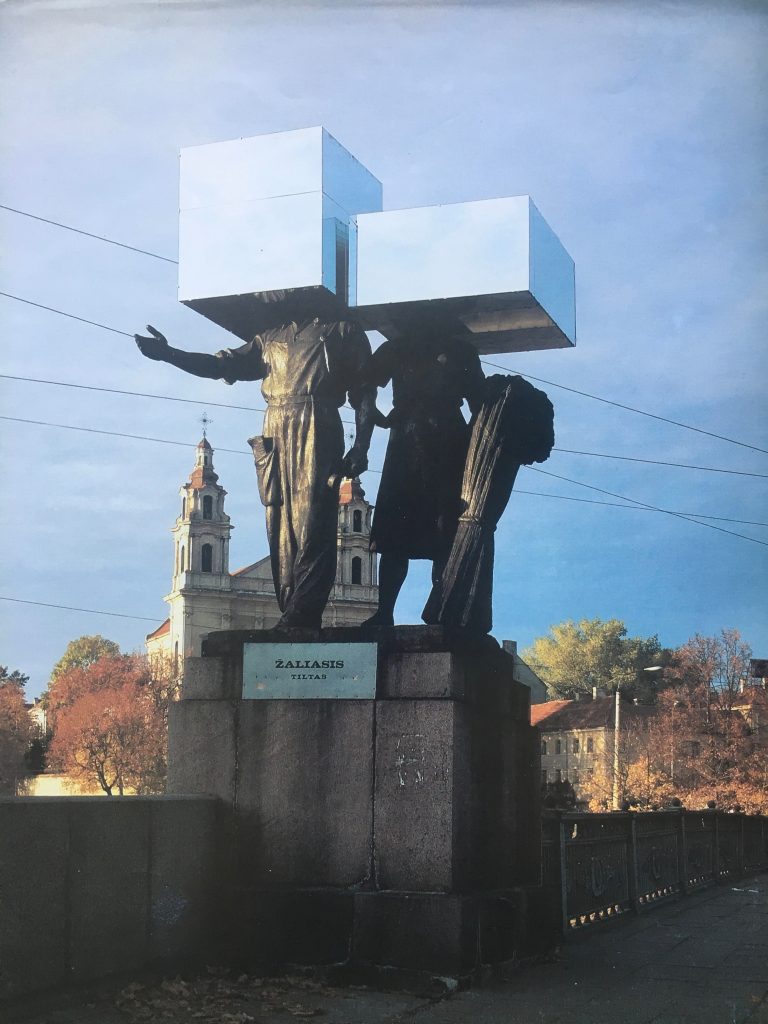 Coming or Going was the title of an installation by Gediminas Urbonas in which the heads of the Green Bridge statues in Vilnius were encased in mirror cubes. In 1995, a worker with his hand up in the air and a farmer girl carrying a wheat sheaf were transformed from an ideological decorative element into a conceptual object reflecting not only the city, but also its state of mind. Always controversial, the sculptures were taken down in 2015, but their journey is not over yet. A question raised by an artist 20 years ago is still relevant today. This exhibition is the missing question mark at the end of the rhetorical question, coming or going?

Built monuments are exclamation marks calling out important dates and names. Unbuilt, rebuilt, reconstructed and travelling monuments pose questions: to whom, where, what and what for? And, especially, why? Why a monument? Is it still relevant to talk about them today?

The exhibition Coming or Going? showcases a selection of projects, performances, actions, films and objects that critically assess the function and form of a monument as well as its relationship to ideology, space and the human body. The monument here is not the goal, but rather a contemporary medium of communication, a tool for the (de)construction of memory politics. These are temporary, mobile, personal and conceptual projects, offering a different perspective on monuments, history and the present. They reflect the political, social and cultural conflicts in the “seismic zones” of public spaces in Vilnius, such as Lukiškės Square, the Green Bridge and Žemaitė Square, where heated discussions arose and numerous actions by activists and artists took place. No less significant are the conceptual actions that took place next to the Vytautas the Great monument in Kaunas, the tactile and para-documentary transformation of Grūtas Park and the case of an anti-monument in the shape of Lukashenko in Alytus. Place is important not only as a physical entity, but also as a discursive space where new forms of activating memory are found and made relevant.

The majority of works in the exhibition were made after 1990 when Lithuania regained its independence and the Soviet idols started to fall and a new stage of the monumentalizing of public spaces began. National idealism replaced Socialist Realism, although the general concept of the monument remained unchanged. New monument-makers unashamedly followed the same monumental rhetoric of an earlier age. Space-commanding elevated heroes made from ever-lasting materials were favoured by the politicians and patriots, while site-specific, horizontal, invisible and questioning monuments were hardly accepted. Therefore, this exhibition does not include the results of official monument competitions and their (un)realised projects as well as other signs of commemoration present in today’s public spaces.

There isn’t and cannot be one “correct” view on monuments, one unconflicting memory. With whose eyes, from which perspective, time, place and experience are we looking at monuments? What does this gaze say about the viewer and the viewed, the makers and the critics? And where in 20 years’ time will today’s monuments be?